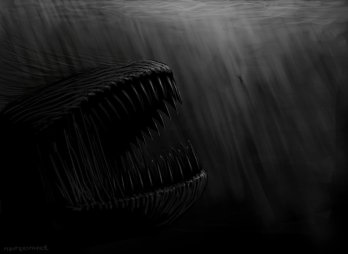 It had promised to be an awesome day. My dad was finally going to take me deep sea fishing off the east coast of the island. Like most kids on the island I wasn’t allowed on the east beach. It was for a stupid reason, of course: a mile out from the east shoreline there was a 500 ft drop off, an undersea cliff, and they didn’t think it was “safe” for us.

I think my dad agreed to take me to the east beach because of the divorce. Both of my parents were trying to win custody of me. They wanted me to choose. I just wanted my family back.

We made a plan to boat around the reefs for awhile, snorkel and let me practice my free-diving. I had been working on it for a year and I could already free-dive down to 21 feet! I wanted to break the world record one day. We found deeper and deeper places for me to dive as we wandered around the unfamiliar reefs and sand bars.

After we had finished exploring a sunken speedboat I decided to sunbathe and snooze for awhile. Dad got behind the helm to take us to our next location.

I was awoken by the shrill ring of my dad’s phone. He cut the engine so that he could hear the person on the other end of the line. I thought it must be his divorce lawyer because he decided to take the call below deck.

I peered over the side of the boat into the crystal clear waters and saw that the ocean floor was about 30 feet down. I wondered if I could free-dive that. Then I heard my dad yelling below deck and I realized he must be talking to my mom. I covered my ears, I didn’t want to hear that. I decided to try the 30 foot dive just for a reason to get off the boat.

I took several long, deep breaths and dove into the lucid, sparking water. I made it down ten feet easily and then 15, I struggled to 20 and then 25…I was doing it! I was almost there, I just needed to touch the seafloor and I could claim victory! I was so close, just a little more, I can make it, I can do it! My lungs began to burn, and I could feel the panic welling. And then, I was there. 30 feet down!

I quickly braced my legs and pushed off against the sea bed, jettisoning myself up toward the surface. My chest and my head were aching severely now. I swam up as hard as I could, hoping I hadn’t made a terrible mistake. Darkness peaked around the corners of my vision. My arms and legs began to feel weak. This had been such a stupid idea, I was going to drown here.

And then, suddenly, I broke the surface. I took the deepest breath I’ve ever taken and tread water for a few minutes as I tried to recover. I’d done it!

I climbed up onto the boat just as Dad was coming up the stairs.

“I free-dove down like 30 feet and touched the seabed! See?”

I looked over the side of the boat.

“Oh actually it only looks about 20-25 feet.” I said quickly. “But that’s still a personal record!”

My dad raised his eyebrow and went to look over the side of the boat. I peered down with him.

“Oh…well now it only looks like around 15 feet. Nevermind, I guess.” I frowned.

Dad backed up from the bow and started shaking his head.

“Sarah, we passed the drop off a quarter mile ago.”

He started running for the wheel.

I didn’t understand. The seafloor was there, I’d touched it just a moment ago. I looked over the edge again.